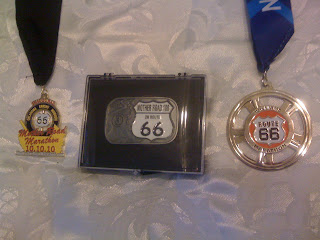 On October 10, 10.10.10, I ran the Mother Road marathon from Commerce Oklahoma to Joplin Missouri.  It is called the Mother Road because part of it is run on Old U S Route 66.  The original super highway that ran from Chicago to Los Angeles.  The Mother Road ain't what it used to be.  Most of it is now state highway or even just under local care.  Which is to say the road is in many places in disrepair.  Nevertheless I had decided that if I was successful in finishing the Mother Road 100 run, then I would attempt to finish all 3 Mother Road races being run, at least partially, in Oklahoma.  This would mean that if I was successful in the 100 mile run, I'd have to run a marathon a week later.
Well I finished the 100 mile race in 24 hours 30 seconds on Sunday, November 14th.  Sunday was also the last day to register online for the Route 66 Marathon in Tulsa.  You could still register at the expo, but I didn't want to leave it to chance, or give myself a reason to back out.  I registered that night when I got home.
I didn't attempt to run until the Thursday before the marathon.  That didn't go well, every muscle in my legs was still sore, and I really couldn't run.  I "jogged" for two miles before giving up.  Still on Saturday I rode with some friends to the expo and picked up my packet, bib, and timing chip.
I decided that I would just see how it went the next day.   The next day I rode with Willie, Adi, and Willie's son to Tulsa.  I had thought about getting a room and spending the night in Tulsa, but Adi said they were going up both days, so I decided to just ride with them.  We got to Tulsa in plenty of time before the start, parked and walked down to the "Race Village."  This year Tulsa had 3 corrals, and they had stated that your bib would be checked before you were allowed to enter a corral.  They were based on your estimated finish time, so you could say whatever you wanted as an estimate.  I was truthful and entered over 4 hours.  This put me in the 2nd corral, but when we entered there was no one checking and I was in the 1st with Willie.  I decided I didn't want to be there, and moved back to my correct corral.  There was about a 5 minute delay between corral starts so I watched the first one start and waited for my start.  We're off and I'm running around a 9:30 pace.  I usually take a few miles to get going so I just settled into a comfortable pace.  I never lost sight of the 4 hour pace group and as I felt better, I dropped the pace below 9 and slowly gained on the pace group.  I passed them but then settled into a 9:05-9:10 pace so I wasn't pulling away from them.  I didn't feel bad, but never felt good enough to pick up the pace.  Around mile 14 I started feeling pain in my legs, both ITBands were hurting and I knew it was time to back off.  I started walking some and trying to fuel up to see if that would help.  As we entered the worse part of the marathon, South on Riverside into the wind, I recognized a park area which was the start/finish for the 50 miler I had done in Tulsa back in July.  I knew they had a full bathroom there, so I left the course to go spend some quality time there.  Upon reentering the course, I felt like a new man, and began to run again.  My pace was still slow, over 10 minute miles, but at least I was running steadily again.  Once I made the turn around on Riverside and had the wind at my back I was able to drop the pace back below 10 minutes and felt like I might be able to finish under 4:25.  I ran the rest of the way in and finished just under 4:25. I finished the Route 66 Marathon thus completing my "Mother Road Trifecta."  For the record, the first Route 66 Marathon in 2006 was my first marathon.
What did I earn by doing this?  Nothing above what anyone else earned in each race.  Why did I do it?  I wanted to push my body to the edge.  I did do that.  I have run twice since finishing, and feel like I have made it with no permanent damage.  I may have an ITBand problem.  But I have run up to 5 miles without pain, so I'm not sure.  I will gradually increase the distance to see if it triggers the ITB pain, but so far so good.
I have no plans to race anymore this year, but a 5k near the end of December isn't out of the question.
Posted by Reese at 12:14 PM 5 comments: Links to this post 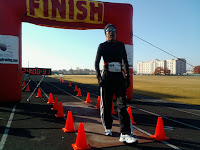 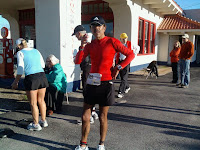