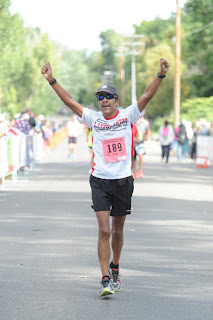 I wanted to run a late summer marathon for several reasons.  Mainly to try and better my Boston Qualifying time by more than five minutes.  While I've qualified for Boston, it's only by about 3 minutes.  And that may or may not get me in.  I also wanted to keep up my general long distance training, and while I don't have to run an official race to do that, a race does keep me more accountable.  Thirdly I'm on an unofficial 50 states journey.
I had narrowed down my choices to two races in Idaho, Pocatello and the Freakin Fast Marathon in Boise, both downhill races and both run on Sept. 5.  I finally decided on Pocatello because it's a more gradual downhill, and a more established race.  That turned out to be a better decision than I thought as the Freakin Fast Marathon cancelled with less than a week to go because of road construction.
My travels to Pocatello included flying into Salt Lake City, then driving to Pocatello.  There were no problems with that, and I went straight to packet pickup/expo which was held in the host hotel.  I was staying across the street so I was near the pickup/drop off area.
The morning of the race I walked across the street to catch the bus to the start.  It was somewhat cold at the start area, but part of the race swag was a backpack that served as our drop bag.  So I wore warm clothes to the start, put them in the backpack and picked them up at the finish.  This was just one of the little extras that made this a well run race.  The start was fairly normal, Star Spangled Banner then a gunshot.  The time I was hoping for was sub 3:50, there were pacers, but no 3:50.  So I ran with the 3:45 pacer for a while.  In retrospect, it would have been better to just keep my 3:50 pace.  I ran with the pacer for about 5 miles before I decided I should slow down.  Besides, the pacer was really running a 3:35 pace and he planned to slow up once the course evened out.  I passed the 1/2 mark around 1:51, but could tell I was starting to fade.  The first 13-14 miles are downhill, then gently rolling terrain after that.  Around mile 20 I was beat.  I started walking/running.  My pace dropped to 11/mile and I watched my sub 3:50 go out the window.  Around mile 24 the 3:55 pacer passed me.  I thought I'll try to keep up with her.  I was able to start running without stopping, and ended up finishing just under 3:55.
The finish area had plenty of food and drink, but I'm seldom hungry right after a long distance run.  I did get the "Steak on a Stick"  by Sizzler, but it was cold and tasteless.  I decided to go back to the hotel for my car and clothes and head back to Salt Lake City.  Again, no problems getting back home.
This is a nice small marathon that doesn't skimp on extras, I would recommend this race for almost any reason you run marathons.  The state, the swag, a fast time, a good time.