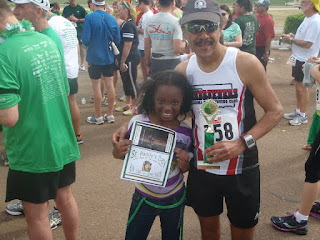 The body of this won't be nearly as deep as the title seems to imply.  It's really about why I haven't posted in several months.  I have tried to stick to running in my blog, and I usually do.  So my running is the reason I haven't posted much.
I've run two marathons since my last posting, and neither has gone as well as I would have hoped.  The first was the Houston Marathon.  Houston is thought of as a fairly fast course.  It is a good course and probably one that many would be able to run well.  Me, not so good.  It was one of my slowest marathons, but then I did run out of energy just after the halfway point.  Don't know why, other than I was probably undertrained.  I hadn't done any 20 milers, but was thinking that my Oct. ultra, and Nov. marathon would sufice as long runs.  The other part of it is that I seldom run well in January, and this was my first January marathon.
The second marathon was in Little Rock, March 3rd.  Little Rock is known as a hilly course, but many people run it because of the huge medal.  My travel companions and I toured part of the course, and decided that it is hilly.  I ran Little Rock faster than Houston even with the hills.  Probably for two reasons, one I was better trained, and two, I decided to be more conservative in the first half.  I still hit the wall around 21 or 22, but that was better than hitting it at 13.1.
Because I was dissapointed in my Houston time I didn't blog about it.  Silly really, I know that it's something just to be able to run/walk 26.2 miles.  And I still finished Houston under 4:25, but I had hopes for a much better time.  Actual times Houston 4:24:58, Little Rock 4:04:38.
The picture above is my granddaughter and I at the St. Patrick's Day 8k.  I came in 2nd in my age group, and my granddaughter ran the fastest timed 50meters, at least among the other times we saw.  Just glad she enjoyed herself running with "Paw-Paw."
Posted by Reese at 9:05 AM 2 comments: Links to this post