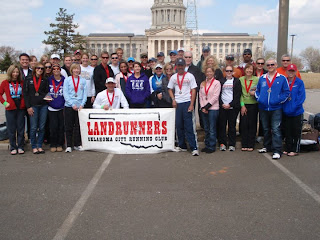 My running club planned a road trip to a new marathon/half marathon about 100 miles from Oklahoma City. We chartered two luxury buses for the trip. This was to be a test of my Boston Marathon training. I was running the 1/2 and wanted to do my first sub 1:40 time. I just missed it at Tulsa in November, 1:40.22. My training has been going well, I've been able to meet all the speed work times and have resisted the temptation to overdo it.
The bus left Sunday morning right on time. It was a festive atmosphere and I was cautiously optimistic. This was a point to point race for both the 1/2 and full. We got to the start and it was cold and windy. But we all knew that we'd warm up once we started. I had just a short sleeve on, and decided to put a long sleeve under. We started and it was a steep downhill for the first couple of miles. I let the hills take me and was running faster than I needed to. As the road leveled off, I started keeping the pace I needed. I felt fairly good the whole time, and took a Hammer Gel every 20 to 30 minutes. For a first time race this one did everything right. Plenty of aid stations, good traffic control, and a nice finish. The wind was at our backs most of the way, but when we neared the finish, the wind was in our face. I was also starting to fade, but knew I was near my goal. As I entered the stadium and got on the track, my watch said I had close to a minute to spare. We did one lap on the track to finish, and I started sprinting like I was just starting a speed session. I passed several people, and as I neared the finish, saw I was going to make my goal. 1:39.19. I reached my goal, and won my age group by 4 seconds. That means that I passed the 2nd place male on the track. Of course I didn't know that at the time.
The ride home was nice. The entire trip was very well organized as was the race.
A couple of weeks earlier I won my age group in the triple crown of racing.
Next up, Boston April 19th.
Posted by Reese at 9:41 PM 2 comments: Links to this post 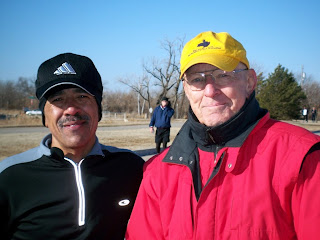 There is a group of races here called the Triple Crown. This consists of a 25k/5k, 10k/5k, and then a St. Paddy's (Day before) 8k. The 25k is named in honor of Jack Rector, the man I'm pictured with. He and his wife started the Oklahoma City Marathon training group years ago. Jack has since passed, and the race was named in his honor. I had only run this race once before, and since it was the only time I'd run 25k, it was my P R. I wanted to run it this year to see if I could improve on my "P R." I also felt it would be a good test of my conditioning for the Boston Marathon. My goal was to hold 5 minute k's. This would give me a 2:05 time, and about a 10 minute P R. I started out holding this pace, and while I would go over by 3-5 seconds, I was able to average this almost the whole race. I finished just over 2:05 and was pleased to be able to reach my goal. I also won my age group.
After the 25k, I decided to go ahead and run the Creek Classic 10k. I've run this race a couple of times before, and swore I wouldn't run it again after two years of poor after race activities. But then a friend took over the race, and I felt like she would make improvements. The race itself had been fine, but the awards ceremonies the last two years took way too long. Last year they ran out of medals and said they'd mail them to us. I never received mine, and when the previous race director emailed me telling me I was going to be charged for not turning in my chip, I pointed out to her, one, that I owned my chip, and two, that they hadn't sent my award. She replied to me that "I don't know why runners care so much about those medals." I told her that I didn't care about the medal, but that it was more about doing what you say you're going to do. Enough of that. My goal for this 10k was to try to hold 4:30 k's. This would give me a 45 minute time, not a P R, but not easy for me. I started holding this, but was letting it drift a bit after 4k. I was probably averaging 4:35 k's through 8k, but got a second wind and ran the last 2k under 4:15 each. I finished just over 45 minutes, and won my age group again. The awards ceremonies was better, but still needs some work. I know it is not easy putting these races on, and hope they can improve next year. They had a great turnout and say they raised more than they had hoped for for their cause.
Next up, 8k.
Posted by Reese at 8:03 AM No comments: Links to this post