In my quest to continue to run ultra marathons in "exotic" locations, I chose this one in the Philippines.  I was originally focusing on Australia, but was unable to use mileage and the cost was too high to pay for my tastes.  So then I started looking at Asia.  At first I focused on Korea, Japan, and China but didn't find what I wanted there.  Then I stumbled upon this race.  Once I found it, I discovered they had a Facebook page.  So I read details there, and after some procrastination, I decided to do this one.
The premise of this race is a 360° run around Mt. Banahaw, an active volcano about 60 miles from Manila Philippines.
To get to Manila, I took a 45 minute flight from Oklahoma City to Dallas, then a 13 hour flight to Tokyo Japan, and a 4 hour flight from there to Manila.  I left OKC at 9:00 am, Wednesday November 5, arriving in Manila 10 pm, Thursday November 6.
The race started Saturday night, 10 pm.  I can only assume this was to avoid the heat of the day.
On Saturday I took a bus to the start and was dropped off within a block.  The start was actually at the guard house of the resort.  There was one bathroom and it was a mess.  I noticed two guys coming in with some of bottles of Gatorade.  I asked where they got it, and they said there was a 7-11 and a McDonald's about a kilometer  up the highway.  So I walked up there to get something to drink and use the bathroom.  All of which was a very wise decision. 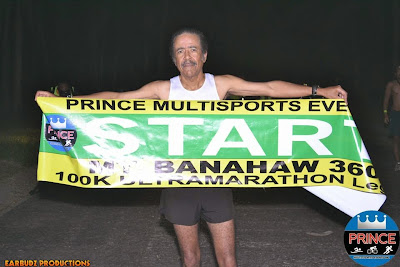 At 10 pm a horn blows and we're off.  Most of the first few hours were on a very busy highway and the cars, trucks, and buses didn't know and didn't care that we were part of a race.  Parts of the road had a shoulder but at times we had to jump into the grass.  Also, you're breathing a lot of exhaust fumes.  There were aid stations about every 6 miles in the first half of the race.  I was carrying one water bottle and figured that would get me to an aid station.  I was running what I considered to be well within myself making sure not to get carried away when people passed me.  I knew it was going to take a lot for me to finish this race.  Did I mention that I hadn't run more than a marathon for over a year?  Every time I would plan to run at least 31 miles something would come up.  But still I felt like I could finish this race since it had a 22 hour cutoff.  I just knew that once I was done physically I would have to dig deep mentally.  After a few hours it started raining.  I was glad actually, because I felt that would help keep the heat down.  We left the main highway and entered more rural areas.  I hit the 50k point still feeling pretty good.  I was also finally getting over my fear that I wouldn't finish the race.  The  rain continued off and on and my feet started getting wet.  I did worry a little bit about that, but there was nothing I could do about it.  As we went through the different small towns, it was interesting to see the way people looked at us.  There are a lot of small school bus taxis, and small motorcycle taxis with side cars.  They would look at us, slow down, then realize we weren't looking for a ride.  As I got into the 40 plus mile range, my watch quit around 34 miles, I was getting fatigued.  I knew it was going to be a hard slough from here on in.  I was walking more than running, but this was a very hilly course, and walk or run, it was tough going up these hills. 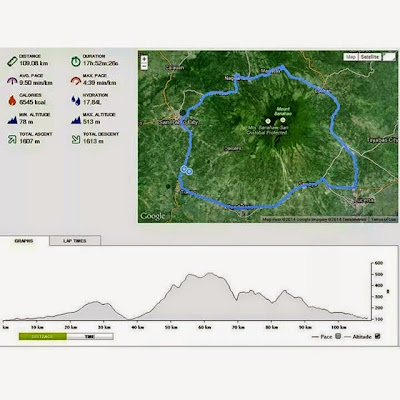 It started raining harder and was less pleasing to me.  But again, there was nothing I could do but keep going.  I was still mostly walking, but able to run from time to time.  I was reading the signs, and saw that we were only two towns away from San Pablo City.  While this was the last city to run through, I knew from the bus ride the day before that the start point at Villa Escudero was several miles past that.  Slowly but surely I made my way close to the city.  But I felt like I had missed an aid station.  I was out of water and getting very tired.  The one good thing about passing through all these towns was that there are plenty of small stores, basically front porches of people homes.  I stopped at one and bought a bottle of coke.  I sat down, drank it and after about 10 minutes I felt much better and started running again.  It was around noon then, so I had been running/walking for over 14 hours.  I finally made it into San Pablo City and I perked up at the thought that this was almost over.  I was running well down the main street when I heard someone yelling at me.  I turned around, and he started pointing down the street I had just passed.  I went back to him, and it turned out he was an aid station.  I thought to myself I would have been really upset to have continued down the wrong street for a long time.  I continued down the correct path and was soon outside the city.  I started seeing signs for a McDonald's that I had gone to the night before to have a comfortable time in a rest room.  The signs gave the distance of 6km, which in my mind meant that I had 5km to go.  Each new sign gave the distance and I was getting happy that I would finish in a very short time.  I got to the guard house and nothing was there.  The guard said I still had a mile to go, disappointment.  But oh well, I continued on and when I finally made it to the resort, I saw the finish line and got my medal, trophy and shirt.
I finished in 16 hours and 12 minutes, 27th of 118 finishers.
I knew because of my feet getting wet that I would have blisters.  After taking off my socks, I saw both my little toes had small blisters.  Also, I had a blister on one foot between my big and second toe. 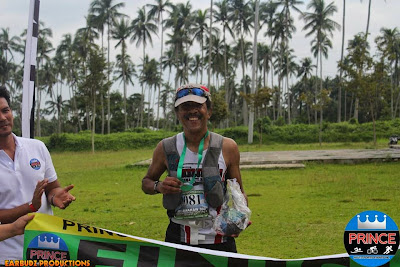 After the finish, I took a shower, ate a little and then started preparing to head back to Manila.  I was told you could flag down a bus from the highway.  There was another runner who had finished before me that was heading back at the same time.  "Wil" became my guardian back to Manila and my hotel.  He made sure I was there before heading home himself.
Everyone associated with the race treated me well and made me feel like a star.
My trip back to Oklahoma City was mostly uneventful, and I am home safe and sound.
I am again thankful to have the energy and ability to complete a race like this.  To have completed the race with no apparent injuries.  To have traveled such a long distance and return home safely.
Posted by Reese at 9:46 PM 1 comment: Links to this post