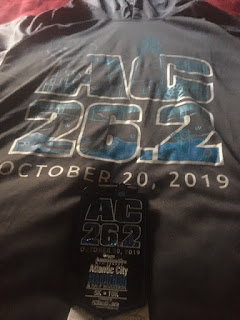 Posted by Reese at 9:54 PM No comments: Links to this post 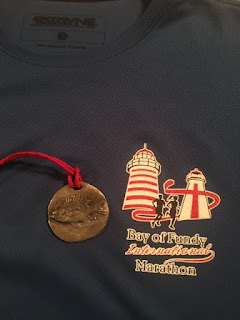 The Bay of Fundy International Marathon is a marathon between Lubec, Maine, United States and Campobello Island, New Brunswick, Canada.
I traveled with a group of 4 other running friends.
This is a beautiful part of the country and Lubec is just across a bridge from New Brunswick Canada.
At least 24 hours before the race we had to clear both sides of the border otherwise we wouldn't be allowed into Canada without stopping. They check your bib off a list and put a sticker on it.
This is a very small race, less than 160 people participating in the marathon. Despite that it is well supported.
The race is also very hilly. We drove the course the day before and after seeing it, I decided I was going to be doing a lot of walking on the uphills.
We were bused out to the start which is at Quoddy Lighthouse and is the Eastern most part of the continental United States.
The day was partly cloudy but it heated up quickly. We ran 6 miles in Maine before entering Canada, then it's 10 miles out and back into the US for the finish which is another .2 miles in the city of Lubec. My strategy paid off and I finished in what I considered a decent time.
The finisher medals are hand made by a local artist.

Posted by Reese at 11:36 AM No comments: Links to this post 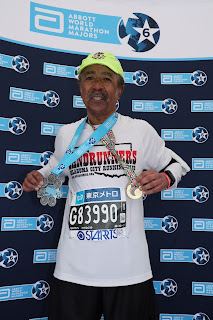 After achieving my goal of running on all continents, I searched for a new goal. I came upon the Abbott World Majors. This consists of running six specific marathons - Boston, Chicago, New York, Berlin, London, and Tokyo. I had already run the U S marathons, so that left the international ones.
In 2017 I ran the Berlin Marathon and in 2018 I ran London, which only left Tokyo. With all of the international marathons, I first entered through the Lottery, then signed up with Marathon Tours. Marathon Tours had a guaranteed entry should I not be able to get in through the lottery. It turned out that I needed the guaranteed entry for all three races.
My travels to Tokyo took me from Oklahoma City to Dallas, and then direct to Tokyo. I left on February 28, and arrived in Tokyo Friday evening, March 1. I didn't have any travel problems.
Saturday morning I had to make my way to the expo. To do so meant that I would have to navigate the Tokyo subway. It was fairly easy to use, with color coded maps and instructions in both Japanese and English.
Because Tokyo is hosting the 2020 Summer Olympics, the exposition center the marathon normally uses was under renovations. Therefore the expo was held in a series of tents. Once again things went smoothly and I returned to my hotel to prepare for the marathon on Sunday morning.
I got up Sunday morning, went outside to check the weather, and it was overcast and looking like rain. I went back inside for breakfast in the hotel. While talking to a man at breakfast, he asked if I had a poncho. I said no, and he offered an extra I could use if I wanted. I gladly accepted.
After breakfast, I left to find my starting corral, which was within walking distance from the hotel. I was in position with about 45 minutes before the start. It was already raining and I was thankful for the poncho.
The gun went off at 9:30 and it took about 10 minutes for me to cross the starting line, as there were approximately 38,000 runners. There were a lot of out and back portions to the race, but there was always a timing mat at the turn around to catch people who might cut the course short. I ran at what I considered a moderate pace, and the constant rain did not affect my running. The course was well managed, and there was little possibility of missing a turn.
The race takes place completely within the city. Some of the sights we passed were The Sensoji Temple where they were playing traditional Japanese court music. We also ran past the Tokyo Skytree, and the Tokyo Tower, which looks a lot like the Eiffel Tower.
As with any international race, my primary goal was to finish in a reasonable time, but not push it and risk injury. While I was trying to keep a steady pace,around mile 18 I started to feel fatigued and began to slow down. I was still able to keep running, and managed to finish in four hours and forty-three minutes.
After finishing I was directed to pick up both my Tokyo Marathon and World Majors Finisher’s Medals. I made my way back to my hotel, attended a ceremony for the finishers and had dinner.
During my stay in Japan, I toured the city, took an all day excursion to Mt. Fuji, sampled many different foods, and took in as much of the culture as I could.
Once one decides to do the World Majors, you have to go to their web site and create a profile. You then fill in the race or races you’ve already completed. After that, you update it as you finish others. When you’re ready to run your sixth World Major, you email them and let them know. In my case when I picked up my bib in Tokyo, it had a QR Code on it, and when I finished, I was directed to a tent where they were passing out the six star medal. They scanned my code, give me the medal, and took my picture.
All the World Majors are excellent races, well run and supported. Some people complained about the tight cutoffs in Tokyo, but I felt like they were fair. If I had to pick a favorite overall, it would be Boston, because of the tradition and support. My favorite outside the USA was Tokyo, because of the city, the sights, and the support.
Now that I have finished an ultramarathon on all seven continents and the six World Majors, I’m asked what’s next? I’m not sure yet. It seems as though finishing a marathon in all fifty states might be a candidate. If I make that my next goal, perhaps 100 marathons might happen along the way.
Posted by Reese at 11:38 AM No comments: Links to this post