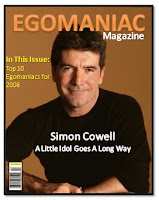 Before I get to the reason for that title, just a few words about training. I've run both trails and the road lately and things seem to be going well. Our cold snap seems to have snapped, at least for the time being.
I commented on another blog that was about what the author felt was an overemphasis of fighting tobacco use at the expense of other worthy endeavours. I expressed a dissenting opinion. The author and I have no problem. We do not always agree, but we are always civil. Another person commented that I was egocentric, or rather my blog is egocentric. Here are his exact words;
"I looked over your egocentric blog brother and I find it amusing, this comment of yours, because connected to what you write about (me, me, me) your concerns are not for public health but rather for your own desires in your own little world. "
Now his comment didn't really bother me. However, he sent me a very childish email. But the purpose of this post is to look at whether what he said is true. Of course it is. This subject has been covered by me in the past, and by many blogs that I've read. We allow ourselves to boast, if we so choose, about what we do or accomplish. Those who have read this blog for any amount of time know that it is primarily about my running. But is running all there is to me? Of course not. I simply choose not to talk about the other things I do or am involved with. Nor am I going to talk about them now. From time to time I do, but not often. If I am to be judged solely by the content of this blog, then so be it.
Posted by Reese at 10:18 PM 2 comments:

Goals - Past and Future

I didn't specifically train to run a sub 20 5k. I plan to do that this year starting past July or August. Vamos a Ver.
Posted by Reese at 5:36 PM 2 comments: 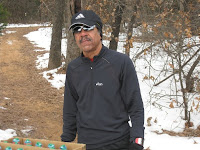 A New Decade is here. And like a New Year or a New Day, what is the difference between today and yesterday. I guess in this case a lot more hung over people.

For my first race of the year I ran a Fat Ass race. For those who don't know what this is, it's a very low key minimal support informal run/ultra. This one has a maximum distance of 50k (31 mile), but you were welcome to run whatever you wanted. I haven't run much since the CIMarathon early December. Several reasons, one - I wanted to rest a bit, two - a very busy time of year, 3 - relatively cold here. We had a blizzard Christmas Eve which stranded me in the DFW Airport trying to get back home. Anyway I decided to run the race and just do it by feel. This is a 17 mile out and back, then a 14 mile out and back. I would guess around 30 people started, but many turned back at the only water crossing. The temps were around 20 at the start, and while there was a makeshift bridge, some just didn't want to chance it. I started out very slow, and was in nearly last place for some time. I pressed on and made it to the dam which you only had to do once. While I had warmed up some on the trail, the dam is elevated and open to the elements. It was cold and windy and my hands started getting cold again. I made it to the turn around and continued back, still undecided if I would go beyond the 17 miles. The trail was snowy, icy, and muddy. After making it back to the start, I sat down, had a sausage with chili and some hot chocolate. I decided to go back out, but since I figured I'd be the last person on the trail, I told the director that I would turn around when I encountered the last person returning. There were only three people who had headed back out to do the full 50k. I just wanted to get past the marathon distance. The second time out I was much slower, not feeling bad, just low on energy. I encountered what I thought was the last person returning, decided to continue just a bit more so I would get over 28 miles, and then headed back. I finished feeling ok, ate a little more then headed home. A nice way to get back into the swing of things.

On New Year's Day I met one of my blog friends. She was headed back to California from Tennessee, and had stopped in Oklahoma City to rest for the night. The next morning we met at Starbucks, and chatted like we were old friends, which we now are. Nice meeting you Penny, look forward to the next meeting. Below is our picture, and here is a link to her blog. 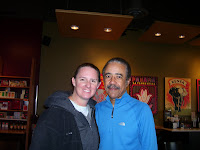