A First for Me - Literally 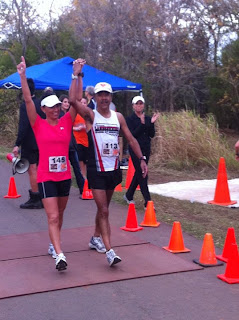 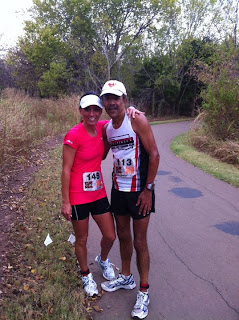 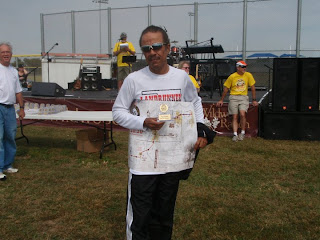 My running club sponsored a road trip to the Mother Road Marathon in Joplin Missouri. This marathon was to run through three states. Starting in Commerce Oklahoma, through Baxter Springs Kansas, and finishing in Joplin Missouri. I was running this as a training run for the upcoming ultras, but also felt like I was in shape to run sub 3:50.
I arrived at the pick up spot late Saturday (October 9th) morning. The bus left on time and it was nice, equipped with DVD, and wi-fi. I knew almost everyone on the bus, and it was a festive ride. We arrived at our hotel, I got checked in and then on to the packet pick up and "pasta feast." These two events were not up to par. The "expo" was nothing more than packet and t-shirt pickup. The "pasta dinner" was ok, but not worth eight dollars.
Some of the runners ate again at a local chain restaurant. I went to my room to finish off the sandwich I had brought for the ride up, arrange my running apparel, and retire to watch football. Next morning I boarded our bus for the ride to the start. We decided to use our charter rather than take the race shuttles to the finish line, and then other shuttles to the start. We arrived at the start with more than an hour to kill. There were plenty of port-a-potties, and water seemed to be the only choice for drinks.
Showtime, we start just after 8:00 a.m. I had decided to run this race by feel. I had talked with a friend, and she said she planned to run an 8:30 pace. I thought about it for awhile and while I wanted to do the same, I said I wouldn't push to do it. I started out running near 8:30's and it felt ok. The roads were sloped or cambered most of the time during the first half. The race really could have started at 7:00 and we wouldn't have had as much problem with the heat as it ended up. I pushed to the halfway point in about 1:50, right on pace. The race ran us into this parking lot, I can only imagine to get the mileage right and to cross us over a timing mat. While exiting the parking lot I tripped over a speed bump and fell. Guess I was going too fast. I scrapped my right shoulder and hands, but only my pride was hurt. I jumped up, and the guy behind me told me my shoe had become untied. I stopped to tie it back, and then promptly tripped on another speed bump, this time I only stumbled, but didn't fall. I pushed on determined that this little incident wouldn't affect my race, and it didn't. The second half of this race is more uphill, and had a steep one at eighteen. While I knew I was faltering, this is where it was all over. I was tired, probably dehydrated, and just knew that I was going to be walking a lot from here to the end. If I could have kept a 11/mile pace, I still could have come in under 4 hours, but I had the "I don't cares" by now. So every time I would start running, and then my head would spin and I'd feel nauseous, I'd slow back down to a walk. I did not run for a non-stop mile from this point on. I never got over the wall but when I saw the finish line, I ran all the way in. I finished in 4:04 and suprisingly took third in my age group.
My critique of this marathon is that the run itself was done well. There were plenty of aid stations, the city police/state police/sheriffs dept handled traffic well. The expo was not good, nor was the pasta dinner. The race should have started an hour earlier, but the weather was unseasonably hot, so I can see where they thought it would be ok. I won't return to this race unless we do another road trip.
As I said this was really a training run. In two weeks I'll be running a 12 hour race in Oklahoma City. And in five weeks I'll be running the Mother Road 100 which will run on a small part of this marathon course, but in the opposite directon.
Posted by Reese at 8:40 AM 2 comments: