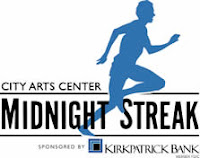 Last night I ran the Midnight Streak. Two problems with that name, first it isn't at Midnight, and second it's not a streak in the old running naked sense. Anyway this was my first time running this night race run at the State Fairgrounds. It is a large race, around 1,000 people. It was hot and humid, but a cool front was scheduled to come in soon. We started at 11:00 P.M. and I had decided to run a little slow to keep from overheating. I felt pretty good and started picking things up. We had one mild uphill and there were sprinklers on the course so I ran through them. I finished and saw that my time was better than I had hoped, 21:55. Good enough for third in age group, first in my age group was a 56 year old man who ran 18:09.
Yesterday morning I ran 7 miles on trails with some friends from the trail running club. This morning I ran 9 miles on different trails with two friends. I'm feeling pretty good lately and hope it continues.
Posted by Reese at 3:42 PM 5 comments:

In my room trying to sleep. Can't seem to wind down. The short story is I didn't finish. I ran 6 loops and just couldn't do any more. Why? I hurt, I couldn't keep anything down, and I was dizzy and wobbling. I wanted it to stop, so I did. More after I get some sleep and drive to San Antonio.
Ok, I'm in San Antonio and I guess it's time for the longer version. I tried to nap before the race last night, but was unable to. It's just hard to change my routine, and I try never to nap because it makes it hard for me to go to sleep later. I got up and drove to the site around 11:00. I felt good at that time and then at midnight we were off. My goal was to hold 30 minute 5k's but to do the first loop just a little slower. Give things and people time to shake out. First loop around 31 minutes and not feeling bad. Second loop still feeling ok and pick up the pace just a bit. Finished in 29 and have my average where I want it. Third loop, working hard. Still on pace, but not feeling great. I've been drinking water and Heed at every aid station, two per loop. Fourth loop, not feeling well and had to start walking. Head was hurting, and couldn't drink anything but water, anything else to drink or eat just made me nauseous. I felt like quitting, but told myself I have to at least make 25k. Fifth loop, felt terrible, head hurt, legs hurt, feet hurt, and was dizzy. Kept drinking, lost it twice, but kept going. Decided I was going to drop at the end of this loop. I came through somewhere around 40 minutes. I decided to sit down for awhile and just see if I felt better. After 10 or 15 minutes I was going to turn in my chip, but instead started on the sixth lap. Again I was walking as much as running, still dizzy and unsteady. I decided I would drop this time. Around 45 minutes for this loop. I almost dropped when I went through the timing map but again decided to sit down and see if things would get better. After about 20 minutes I still didn't feel any better, so I dropped.
I was bummed out about this, but today I still feel like I made the right decision. I can't explain what happened, I've gone farther than this in training, but things just didn't go right. I don't know if it was the heat, if I was sick before I started and it just got worse. I just don't know. I feel ok today, just the usual soreness and some fatigue but no different than if I had run 20 miles in training. This was my first DNF and I hope it doesn't make another one easy. But for now I'm not dwelling on the negative.
Posted by Reese at 8:21 AM 7 comments:

Just a brief update. I'm headed to Ft. Worth TX tomorrow to run a 50k called El Scorcho. It starts at midnight Saturday night. Then after finishing the race, and maybe a nap I'm heading to San Antonio on business.
Posted by Reese at 9:29 PM 3 comments:

Hanging by a thread

Tuesday I called a supplier who was way behind on shipping us some parts. A man answered the phone, and as soon as I told him who I was, he said "your parts aren't ready." An odd response I thought from someone we'd done business with for over 30 years. I politely asked when he thought they would be ready, and he said Friday. Today a lady from the company called, and told me the man who I'd spoken to, the owner, committed suicide. He was 57 with a wife, children, and grandchildren.
Posted by Reese at 9:00 PM 6 comments:

Not that I'm a big time patriot, but it's odd to me that today is better known as the 4th of July than Independence Day.
This morning I ran the Freedom Run. It was hot but overcast. I thought that it would be a little easier than my last 8k. Wrong, it was not sunny, but it was still 85 degrees. I started off easier and felt like I was running a pace I could sustain. But after 5k I started suffering. There was a water stop at 6k so I slowed to a walk, took two cups, poured one over me and drank the other. I finished and took 3rd in age group. Later a group of us met at Starbucks and hung around for awhile. It has been a good day, and my training is going well. I'm still not racing as well as I think I should, but I just chalk it up to the heat.
Posted by Reese at 5:17 PM 2 comments: