In my last post, yeah I know it's been awhile, I mentioned that I had a surprise.  I really meant to blog about it before the event.  But I didn't get around to it.
In any event I had decided to do an ultra marathon in Europe.  I looked around at a lot of events, but decided on G2E for several reasons.  It wasn't large, but it wasn't the first year either.  It looked doable, and I read good reviews about it.  I also liked the thought of going to Scotland.  Since I was injured last year, I've only run one marathon and two half marathons.  So I knew it would be a difficult run.  The race is 55 miles.  And I knew I wasn't trained to run it fast, but still I felt like I could finish within the 12 hour cutoff.
My training went fairly well.  I mostly followed the marathon training with the runners training for the Memorial Marathon.  I did add in one 30 mile run.  I ran to another city and back.  It was kind of funny because I had to do this run on a U S Highway, and a lot of people driving between the cities know me.  So during the next few days people were asking me if I had run to the other city and back.
The trip fell into place.  I was flying on American, and set up my flights so that I had decent seats, and a big plane for the long flight from Dallas to London.  I chose an apartment converted to a hotel because of the proximity to the race start. Race day was Saturday, April 6th starting at 9 a.m.
I left Oklahoma City Wednesday, April 3rd around 5 p.m. and Dallas around 9 p.m.  I was flying on a Boeing 777 which I had flown on before to South Africa.  The 777 has personal entertainment centers even in coach.  You can watch movies, T V series, or documentaries.  My flight to London was 9 hours long.  I arrived at London's Heathrow around an hour late.  I missed my connection to Glasgow, but flights were leaving about every two hours so I made the next one.  No problems in Glasgow airport, a cab ride to my hotel and I was ready to settle in around 7 p.m.  I was hungry and asked the lady at the front desk for suggestions within walking distance.  Dinner, then to bed to try and get acclimated to the new time zone.  Scotland is six hours ahead of Oklahoma time.
The next morning I got up and set out to find the starting point for the race.  With one slight mistake I was able to find the start at Ruchill Park.
Confident I could find the start the next morning I prepared my gear and outfit for the race.  I had a running vest to carry the requirements for the race.  A headlamp, space blanket, cell phone, and water proof jacket were all part of the required "kit."
I didn't sleep well the night before.  But I chalk that up to jet lag rather than neveousness.  I got up, got ready, and walked to the start.  There were plenty of people already there.  Checked in, and waited for the start. 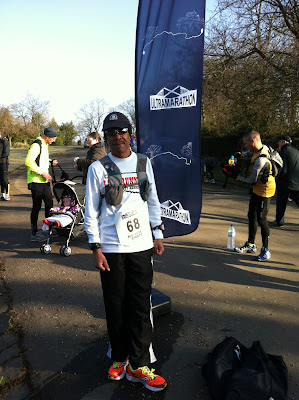 A few minutes before nine the race director gave some basic instructions.  The course was pretty straight forward.  Keep the canal to your right and you were probably going the right way.  There was one major turn, but it was right after the second checkpoint, so you wouldn't have any problems there.  You must keep your cell phone on at all times, and you must report in if you drop out somewhere other than a checkpoint.  Right at nine he shouted "go."  Eighty-nine of us started on our 55 mile journey to Edinburgh.  I started middle back of the pack.  We had a few blocks of city streets before we reached the canal.  Once at the canal, the path was narrow.  I had a plan to just stay at a moderate pace and see what the day would bring.  The weather was almost perfect, overcast and just over 30 degrees.  I was running around a 10 minute pace and passed a few people after a couple of miles.  I made it to the first checkpoint, 13 miles, in just over two hours.  I felt good, made sure they got my number, topped off my water bottles and took off.  I hit the second checkpoint at just over 22 miles in three hours 45 minutes.  This one was the major aid station at a place called the Falkirk Wheel.  This is a major tourist attraction and billed as the world's only rotating boat lift.  While it was an interesting sight, I had hit the wall and was feeling sick to my stomach.  They had chairs here, and I sat down and briefly considered quitting.  I just didn't feel good, but something said get your butt up and start moving, so I did.  This was also the only major hill on the course, so I had to walk it anyway.  A short time after climbing the hill, I came to a long tunnel.  I had read about this, and they had recommended that you use your head light here.  I didn't because there was dim lighting inside.  It was a long walk, but it gave me time to recover some.  After coming out of the tunnel I started back running.  I  settled into a slow pace and could not get back below twelve minute miles.  I went through checkpoints 3 and 4 with no problems.  At each one they'd ask how I felt.  My reply was not bad, slow but I don't hurt.  I made the last checkpoint, 5, at mile 48 in nine hours and fifty minutes.  That left me two hours and ten minutes to go seven miles.  I knew I would finish, but I was dissapointed in my time.  The course enters Edinburgh about 4 miles from the finish.  It was getting dark but still light enough to see, and there were lamps along the course now.  Two young men were walking towards me and they asked me why I had two bottles.  I told them I had come from Glasgow and they seemed impressed and said "good on you mate."  I was pleased I was able to impress young men.  I cruised on to the finish, collected my shirt and medal.
I finished in 11:37:55, 65th out of 75 finishers, and 89 starters.
There was a party going on in a nearby bar, but I decided all I wanted to do was get back to Glasgow, shower, and go to bed.  I got directions to the train station, bought my ticket and took the just over an hour trip back.  Took a cab to my hotel and crashed.  This was a very low key but well run race.  I'm glad I did it and thank all those who supported us in the endeavour.
My trip back to the U S A was fairly uneventful.  Some flight delays, but I made all my connections and my bags arrived when I did.
The only reasons I can think of as to why I bonked and never got over it are that I was under trained and undernourished.  I only took gels, and wasn't averaging one an hour.  The aid stations only had water and an energy drink which tasted more like an electrolyte drink.  But I finished, and I finished within the time limits.  For that and the fact that I finished with no injuries I'm thankful. 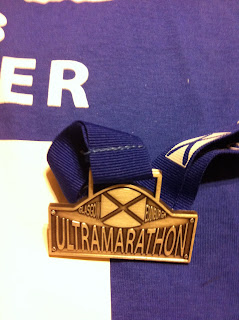