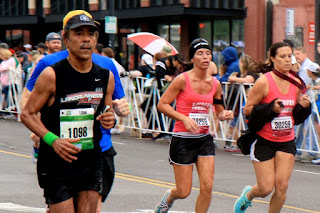 On April 29th I ran the Oklahoma City Memorial Marathon.  This is my third time running, and the weather was pretty good.  It was overcast and around 60 degrees.  I got into the corral, and waited for the start.  This run is to remember the 168 people who died during the 1995 Murrah Building bombing.  And the survivors as well.
I had thought about trying to run a BQ during this race, but the humidity was high and I just didn't think I had a sub 3:40 in me this day.  So I decided to try and run smart, and within myself.  I also needed to run sub 4 hours to get a better seeding at Comrades, so that was my main goal.  I started at a nice easy pace, just barely sub 9.  It felt very easy but I knew that easy always changed in the second part of a marathon.  I hit the half marathon mark around 1:57 and was still cruising very well.  It started raining and since it was a cool gentle rain, it was welcomed.  The second half got a bit difficult, but I was pretty much able to maintain a sub 4 hour pace.  As I raced down Classen I began to pass the walking wounded.  I'm not gloating as that has been me many times, but it did make me feel as though I had run a smart race.  Since I knew I had about a 2 minute gun/chip difference, I then made it my goal to beat 4 hours by the clock.  I made the last turn and started toward the finish.  I could see the clock change to 3:59 and I pushed on in just under 4 hours clock, and a 3:57.08 chip finish.  that meant I had a 3 minute positive split, and while I'm still looking for a negative marathon split, I was satisfied with my effort.
Last weekend (May 6), I had decided to run a trail race.  It was an unofficial 50/25/10k trail run.  I was trying to get more miles in training for Comrades, which I really haven't said anything about, but I'm returning to South Africa to run the "down" year there.  It will actually be a longer race (56 miles) but a net downhill.  Back to the trail race, it's run at Thunderbird lake, and is to raise money for a good cause (which means I don't remember what the cause was).  I had planned to do 50k, and took that start.  This was a much tougher course than I thought it would be.  I ran 25k here last year, but it wasn't the same course.  This one had some very steep ups and downs, such that if it had been muddy, the only way down would have been to slide, and I'm not sure you could have gone up in the mud.  Anyway it wasn't muddy and I pushed on.  I ran almost all of the race with a guy I met that day.  He had also run the Marathon the week before, and was training for his first 50 mile race.  Less than halfway through the 25k, I had already decided I wasn't going back out for 50k.  This was too technical a course, and my training is for a road ultramarathon.  It took us over 3 hours to cover the 25k (15.5 miles) and I knew the 2nd loop would be slower.  I finished feeling pretty good, but rested a bit, got myself together and went home to a nice shower and clean clothes.
Next up, I'll probably run a 5k next weekend (May 19th) then on to Durban South Africa.  I leave May 31st, and the race is June 3rd.
Posted by Reese at 9:07 AM 1 comment: