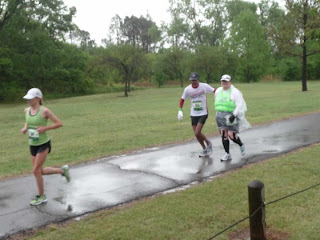 Sunday, May 1st, 2011 I ran the Oklahoma City Memorial Marathon.  This marathon is called "A Run to Remember."  And the race director makes it clear that this is not a race about running, but about remembering the 168 people who died in the Oklahoma City bombing of the Murrah building.
It was raining Sunday morning and because of the threat of lightening, the start was delayed for 30 minutes until 7 a.m.  It was cold and rainy at the start.  I was dressed ok for the cold, but I knew if it kept raining I'd be soaked and cold.  We start and I was back a bit so I had to fight my way through a lot of slower runners, and of course the required "walking 3 or 4 abreast" crowd.  I was running this marathon 13 days after running Boston.  I was doing it more as a training run for Comrades, but still felt that I could beat my Boston time.
It did rain almost the whole time, and I was pretty much ok most of the time.  I hit the half at about 1:51 and was feeling fairly good.  I've only run the OKCMM once before, and it was not pretty.  In that run I hit the wall at mile 17 and finished just under 4:30.  As I approached Lake Hefner I started worrying that this would happen again.  But the first time was a hot day and this was good running weather.  As we ran the trails at the lake I could feel the wall coming, but I was still running well.  The picture above was taken on the lake trails around mile 16.  The lady in the picture is running her first marathon, and I happened to catch her just as a friend was taking her picture.  She had taken the early start, and with the delay got an extra 30 minutes.  She did finish by the way.
I passed mile 17 still feeling good, but also knowing I was going to slow down now.  For a brief time the sun came out, and many in the crowd were saying no more rain from here to the finish.  I thought they knew what they were talking about, I was wrong.  The sun went away and it started raining more and getting colder.  As I headed down Classen Blvd., my feet were numb from the cold and rain.  I didn't really feel bad, but my feet felt funny with each step.  I did walk, twice I think, but then I started to get my second wind.  While I wasn't running as fast as before, I was running.  I ran in from there and finished in 3:53.11.  Four minutes better than Boston, but still a 9 plus positive split.  Oh well, just a training run, right?
When I finished I started uncontrollable shivering.  Our running club had a tent, and I spent a few minutes there but decided I needed to get to my car, get home and get warm.
Since OKC my training has been going well and I'm gaining more confidence that I'll be able to finish Comrades.  Flight booked, hotel booked, guess I'm going.
Posted by Reese at 10:15 AM 2 comments: