Saturday I ran the Super Summer 8k. It was hot, humid and I ran too hard. I had to walk during the 6th k. I was dizzy and needed to rest a moment. I finished ok, and after a while felt much better. Second in age group and a nice hat. Again, nice to get something other than a medal.
After that, I went over to the nearby Bluff Creek Trails. It was the annual Green People Run and poker game. You signed in, got 3 cards, and then for every 3.5 mile loop of the trails you ran, you got two more cards. I only ran two loops, and even then I feel like I overdid it a bit. This is put on by the Trail Running Club that I belong to, and it is a nice get together. Beer, food, and other drinks.
I had a nice father's day. Family took my son and I out to dinner, and got to spend some time with my granddaughter.
We have now entered the time of year that I hate in Oklahoma. We will be near or over 100 degrees for the next week. Hot, humid and just terrible weather to be in. The Oklahoma City Newspaper, which I refuse to subscribe to, always can be counted on to run a cartoon in winter when we have very cold and snowy weather making fun of Global Warming. They never run that cartoon in the summer.
I see no real benefit to run in the evenings, so I'm trying to get my runs in early.
Posted by Reese at 6:19 PM 4 comments:

A First for Me 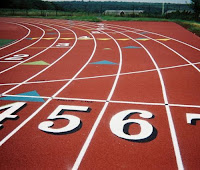 A couple of weeks ago I got the bright idea to run a track 5k. I thought I could do better because of the even surface. A couple of things I didn't take into account were, that it would be afternoon before it started, and it would be very hot.
The run was yesterday. The schedule said that the 5k would start around 10:30. So I arrived at the suburban high school track around 9:30. It was warm, but completely overcast. I thought this would be good. I did a few easy warm up laps, and then they cleared the track. So I went into the stands to watch the events. This went slow in my opinion, but I've never attended a track meet before. But to me there was way too much time between events. There weren't too many people running the 5k so they put us all together, which was fine with me because otherwise the masters group would have been last. We line up, and start. If you've never run a track 5k, it's 12.5 laps around the track. Each 2.5 laps = 1k. So we start at the 200 meter mark, halfway around the track, so we can finish at the s/f line. Since it was so hot, and now all the clouds were gone, I had thrown out all ideas of a great time and just decided not to overdo it. Several people that I felt were slower started out much faster than I did. But I had passed most of them by the 3rd lap, and lapped all of them before the finish. Don't get me wrong, I was lapped also, and double lapped by the leaders. They have a sign at the s/f line with "laps to go" but that is only for the leaders if you get lapped. I was wearing my Garmin, and I knew how far I had to go. They tried to bring me in a lap early, and I almost let them do it, but I continued on around for the last lap. Just before I finished, I lapped a guy, I knew I had lapped him, because he was one that had started fast, and I had passed before the 3rd lap. Anyway, they told him he was finished right after me. I knew he had another lap, but I didn't say anything. He came up to me and asked me if I didn't think he had another lap to go, I said I wouldn't worry about it, it really doesn't matter since we're not high schoolers. I finished in 22:41. Not great, but good enough for 1st in age group. I would like to do another track 5k, but under much better conditions.
Today I decided to run trails. I had the idea that I would just take it easy, and run all the colors of the Draper trails. I ran green, blue, red, green, orange, green, and yellow. I tacked on a little more to make it an even 10 miles. It was very humid, but I go an early start so it wasn't too hot.
Posted by Reese at 10:26 AM 5 comments:

Where Dreams are Born

First, I don't want you to forget about my little quiz. Click here, and I'm adding three clues. One, it's a movie, two it was made in this century (21st), three, it's Sci-fi.
Saturday I had decided to run this 1/2 marathon. I wanted to see where I stood training wise, and see if I was heat acclimated. It was overcast, but very humid, hot, and windy. Hmmmm, I bet I could switch to the 5 or 10k. In fact, I would have had a chance to be top 3 in the 10, but I couldn't have known that, and besides, my goal was to see how I could do in a longer run. This could be a nice little race, but has had problems over the years. It was to have a few today also. We started, and as usual in a longer race, I started a bit slow. By mile one I started pulling my pace down to sub 8's. It felt good, and I felt like one I could sustain. I hadn't made the turn into the wind yet. Just after the 3.5 mile mark, we head into the wind. It's still early, so I don't feel too bad, but the problem here was there should have been an aid station around mile 4.5 - 5. On a cool day, this wouldn't have been a problem but today it was. So I had to make it to the 6.55 turn around for more aid. Then back to the 10k turn around for the next station, over 4 miles. I started walking about 30 seconds every mile after the turn around. But I must have had a lot of company because no one passed me (for good) in the 2nd half. With less than one mile to go this guy did pass me, but I found the strength to pass him back and run to the finish. My main goal here was to stay under 1:50 and I did, 1:49and change. Second in age group and lots of fluids. Which they ran out of at the finish line. They went to get more, but still not good.
Yesterday I had promised a friend to do 14 miles with him. So we did it, but neither of us could find out groove, and ended up doing it very slowly. Today I'm still dragging, but I don't think it's anything a day or two of recovery won't cure.
Posted by Reese at 4:31 PM 6 comments: 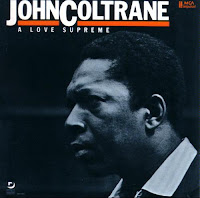 While I'm using John Coltrane's title and cover art, it is in no way connected with this post. I just think that the title works for what I'm saying. Another title I thought of was "The Greatest Love Story ever told." And I'm not getting religious or spiritual here. I have just finished with what I think these titles describe, and I'd like you to "name that story." The only hint I'll give you right now is that this story spanned over two thousand years. Again, it's not religious.
Posted by Reese at 7:50 PM 2 comments: 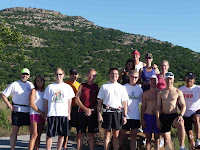 Saturday a group of friends from the running club decided to do a road trip to the Wichita Mountains, run up Mt. Scott and then go to Meers for their famous hamburgers. We met to carpool and headed down to the park. It was a great group. It was what I love, a group of people who you don't have to watch what you say around. We ran/walked up the mountain (big hill for those of you in states with real mountains). It was about 3 miles up, and it was a good workout. We stayed at the top and took a lot of pictures, and then headed back down. It was hard to hold back, and finally after I realized I had a chance to run my fastest mile ever, I just let go. I was running close to a 6:15 minute mile. My best total mile was 6:23, but Garmin says my fastest pace was 5:45. If only.........
It was starting to get hot, and we decided to head on to part two, Meers for hamburgers. You usually have to wait in line here, but we got there almost at opening time, so we got right in. I had eaten here once before after the Spirit of Survival Marathon on my birthday last year, but I was sick after finishing and really didn't enjoy the visit. I enjoyed it much better this time. It was a great road trip, and we're planning another one at the end of this month.
Sunday I ran trails with some Trail running club friends. And this morning I did some speed work.
Posted by Reese at 8:57 PM 2 comments: