Lately I've been watching Gunsmoke each evening.  I know many wouldn't think of watching this.  First it's in Black and White.  Second, it's a western.  Well, you're right, it's B & W, but it's more than just a western.  In fact it's more of life drama's than about the old west.  For instance, tonight's episode, "Call me Dodie" is about a 17 year old lady who is the oldest child in an orphanage.  She is a mother figure to the rest of the children.  They look up to her because she makes the best of the cruel situation they're in.  But she escapes to Dodge City and people do their best to take advantage of her. She has the innocence of a child, but she can take care of herself.  Again, she has the ability to make the best of whatever situation she finds herself. There were no gun fights, Matt didn't have to shoot anyone or beat anyone up.  Miss Kitty wasn't kidnaped or have to break up a potential fight in the "Long Branch."  Don't get me wrong, this sometimes happens.  But the longevity of the series can be attributed to how deep the episodes were.  Other night time series have lasted longer, but Gunsmoke has more episodes.  It was filmed during a time when they didn't repeat as much.
Many of the story lines probably give a false sense of "old west justice and sense of fair play."  But that's ok with me, I'm not really looking for a dead on realistic portrayal of the way it was.  One example is when Matt knew a man had set up another man to be killed.  He did this because he had fallen in love and promised the woman he wouldn't kill again.  So he set the man up so that Matt would have to kill him.  In the end his love interest also died.  While Matt knew the man had caused both their deaths, he let the man go because he knew his conscience would bother him for the rest of his life.
Gunsmoke, it's more than just a western.  Thank you James Arness.
Posted by Reese at 7:06 PM 2 comments: 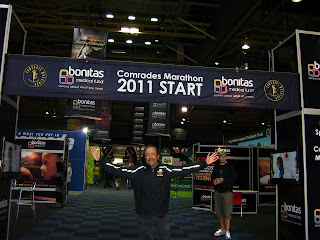 On Monday, May 23 I boarded a Delta Jet to begin my journey to Durban, South Africa.  My journey took me from Oklahoma City to Atlanta where I boarded a 777 for the 15 hour non-stop flight to Johannesburg.  From Johannesburg I boarded a South African Airways plane for the 1:15 flight to Durban.
The long flight from Atlanta to Johannesburg included three full meals, none of which were good, and all the individual entertainment I wanted.  I went back and forth from watching movies or TV series to napping.  They served plenty of water, and every few hours I walked around the plane. The short flight to Durban also included a meal which surprised me.  You would be lucky to get peanuts on a flight that short in the U S.
I arrived in Durban at 11:00 P.M, there is a 7 hour time difference, which meant I had been travelling for 27 hours including layovers in Atlanta and Johannesburg.  I took a cab to my hotel and had no problems checking in.
The hotel was decent, I would compare it to a Holiday Inn, but was on a bad side street.  However, you only had to go about 1/4 block and you were on one of the main downtown streets, with access to anything you could want or need.
Since I arrived on Tuesday night, and the Expo didn't open until Thursday I spent Wednesday sight seeing.  Durban is not a big tourist town, but it is on the Indian ocean.  So there is a lot of activity along the beach, which was about a 5 minute run from the hotel.
Thursday I went to the expo, for those who know, it was about twice the size of the OKC Memorial Marathon Expo.  There wasn't a lot of activity the first day, and since I was an International Runner I had separate areas to pick up my bib and check my timing chip.  Everything went smoothly, and I bought a couple of logo items.  It turned out it was good I checked in the first day, I went to the expo Friday afternoon, and the lines were out the door.  It turns out someone had damaged the Internet connection, and they were having to do everything by hand.
Friday the International runners got a tour of the course by luxury bus.  We made several stops along the way including a stop at the Ethembeni school.   This school is right on the course, and the children lined the sides during the race with hands outstretched for a "high five."
From their website:
"Established in 1984, Ethembeni School serves 300 physically disabled and visually impaired children from all over Kwazulu-Natal, Kingdom of the Zulu (South Africa), educating them to reach their highest potential and to become independent and responsible citizens of the community.

The name Ethembeni means “Place of Hope” and the motto Phila Ufunde – Live and Learn. At Ethembeni 300 beautiful children live, learn, and give us joy and hope."  The group in the picture below sang and danced for us.  Many donations were left during this visit.  It was inspiring to see them on Sunday during the race. 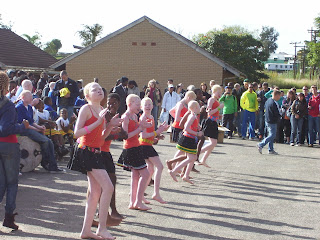 Actually seeing the course was a bit intimidating to me.  All along I'd heard about the hills, but to see them, and to see they were one right after the other for most of the race was just disheartening.  Oh well, I'm here now.
While this race is called a marathon, it's actually an ultramarathon.  The official distance was 86.96km or 54 miles. The race is run between Durban and Pietermaritzburg (Up Year) and reverses direction each year.  This was an "up" year.
Race morning:  The reason I chose the hotel I stayed in was it was less than two blocks from the start.  Sunday morning, I got up, dressed and went down to a breakfast the hotel was providing.  The race started at 5:30 and it was cool but not cold.  I didn't wear anything extra and was a bit chilly at the start.  I was in my coral with about 20 minutes to go.  Chariots of Fire, the Cock Crows and then the gun.  We're off.  Over 16,000 started this race, but they say that it takes no more than 7 minutes for everyone to cross the start, I was across in less than 3 but we were moving slowly for a few blocks.  The time to start is important since, even though this is a chip timed race, you have 12 hours to finish from the gun.  After a bit I settled into a nice pace.  I have the usual 3 goals for this race, dream goal, under 10 hours, realistic goal, under 11 hours, fall back goal, finish before the 12 hour cutoff.  We reach the first of the five major hills, Cowes hill.  I run non-stop up this hill.  It takes a lot out of me but I'm still feeling good.  Next up. Field's hill, I also run all the way up this one.  More fatigue and now I know I won't be running all the way up another hill.  Along the way there are plenty of water/aide stops.  They have the water and Energade (similar to Gatorade) in "sachets."  These are plastic bags that you have to bite the end off and then squirt into your mouth or on your body.  These must make for a trash mess, but they do keep them cold until they give them out.  I ran/walked up the Botha's hill and finally walked the last two, Inchanga and Polly Shortts.  I knew I would finish but both my time goals were out the window.  I didn't have any energy to run very long so I was running maybe a minute and walking one or two.  As I got into Pietermaritzburg I did begin to run continuously again.  And when I entered the Cricket Stadium that was the finish I began to run and pass a lot of people.  I finished in 11:11.  Not as well as I wished, but just happy to finish and get my medal.
If I run this again, and I might next year for the "back to back" medal, I would insert a walk/run strategy for all the hills.  I think running the first two took more out of me than I would have lost with some walking from the beginning.
I truly enjoyed the entire experience, and have left out a lot of details because this is very long already.  I recommend doing this race if you can.
Posted by Reese at 8:54 PM 6 comments: