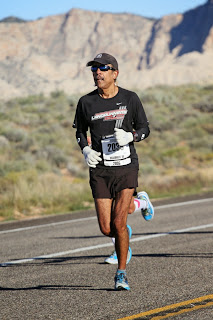 This is a milestone year for me.  This year I become 60 years old.  I don't put a lot of stock in decade milestones, but this one is important to me.  I guess it's important as far as running, because I wasn't running before the age of 50.
The Chicago Marathon was October 13th, and I had expected to run there.  But due to a malfunction with Active.com, I wasn't able to get in.  So I started looking for other marathons near my birthday, and discovered that the St. George Marathon was on October 5th, my 60th birthday.  However, St. George is a lottery marathon.  So you are not guaranteed entry.  I entered, and was picked to run.  Now to train.
St. George is known as a fast course.  It has around a 2500 feet drop in elevation.  I know people who have run it, and they told me that I would likely have problems going down the steep drops.  I wasn't too worried about that, but did try to do some downhill running.  Not easy where I run since my part of Oklahoma is not very hilly.
Since this was a milestone birthday, I wanted this to be a milestone race.  Before this run my marathon PR, my personal record time, was 3:42.  I decided that I at least wanted to PR in this race, but I also wanted to try to run below 3:30.  During training I wasn't sure about the sub 3:30 goal, I did think I could PR but you never know what can happen in a race this long.
I decided to fly into Las Vegas, and then drive to St. George UT.  The drive is about two hours and somewhat scenic, if you like mountains, rocks, and desert.  A friend that used to live in Oklahoma who now lives in St. George offered to let me stay at his home.  I arrived at his house and then we drove to the expo/packet pickup.  A nice expo, but I didn't need anything, so after pickup, we decided to drive the course.  Since we talked the whole time, I really didn't map out any strategy for the race.
Race morning, my friend drove me to the bus pickup and I took the bus to the start.  It was cold and windy and I was cold for a while.  They had camp fires, so I got close to one of those and was able to stay warm until the start.  The race begins and I run what I consider to be within myself for the first couple of miles.  It's down hill at this point, so I'm running close to 8 minute miles, which is what it's going to take to get below 3:30.  But the first 13 miles are really rolling hills, so while I'm trying to maintain 8 minute miles, it's taking something out of me on the up hills.  There is one very large hill close to mile 8.  After a few of these by the half way point I was starting to think all of my goals were out the window.  After the half you start almost constant downhills, with brief easing of the hill or leveling off.  At this point it was either run fast or step over to the side and start walking.  I wasn't willing to walk or put the brakes on to go down the hills, so I started running fast.  I continued to run fast with the occasional walk through the aid stations and came into town with a large enough cushion that I knew my PR goal was attainable.  I was hurting at this point, but determined to continue running.  I came into sight of the finish, and crossed in 3:35:22.  A 7 minute PR.  I sat down immediately after the finish.  I rested a couple of minutes then continued on to get my finisher's medal and exit the area.  My friend was waiting for me, and we went back to his house.  A shower, and I felt much better.  Made the drive back to Las Vegas.
A Personal Record on my Birthday in St. George.