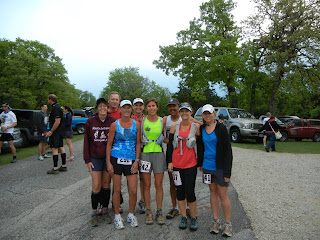 Sunday, April 1st, the OKC Landrunners took two buses to Ardmore for the A2A Marathon, Half Marathon, and 5k.  This was my 3rd time running the half marathon.  I chose the half because I was thinking of running a 50k (31 miles) the next weekend.  Also because while this is a well run race, I just have no desire to run the full here.
I ran what was at the time my fastest half here (1:39:19) the first year and I qualified for the New York Marathon with that time, which was my goal.  But I must add that we had a tail wind and this is a point to point course running almost completely due South.  Those who know Oklahoma know that we have predominantly South winds once we get past February.  So that first year was an anomaly.  This year my goal was just to run within myself, and hopefully sub 1:45.  It was a bit overcast, and it was expected to be a brisk headwind.  We started and I just tried to stay within myself.  It was windy and a bit cool.  After about the halfway point the sun came out and it started to get warmer.  I was still feeling pretty good at 10 miles, and was able to keep running despite starting to run out of energy.  On to the finish and it appears I'm going to beat 1:45, final time 1:44:09.
Regarding the 50k, I wanted to run it as a training run for Comrades.  But since it's a low key race, and you could register up until the day of the race, I was waiting to get a handle on the weather report.  While I wanted to run over 26.2 miles, I didn't want to do it in the rain and mud.  This is a trail race, albeit a fairly tame one, but still run in the woods on dirt trail.  The weather report looked favorable and I signed up the Tuesday before.  A friend had expressed interest in running her first ultra, so we agreed to travel together the 70 or so miles to the race.  As race day got closer we went into a rainy weather pattern.  Not heavy rain, but a slow steady rain and I began to get concerned about the condition of the trails.  Race day morning and it was overcast, lightening in the distance and a forecast of rain.  Oh well, we're committed now.  We make the drive and while it's overcast at the race, it's not raining.  Trail reports say the trails are in almost perfect condition.  We start, and I running fairly well.  This race is two approximately 7.5 mile loops for 25k.  Those of us doing 50k then repeat the course.  The first two loops go very well for me, and I'm feeling pretty good.  I go out to repeat the first loop and I'm starting to lose energy.  Still running well though.  When I finish the 3rd (1st) loop, and I'm in the start/finish area, I see my friend coming in.  She's looking good for over 22 miles and her first ultra.  I take off before her, but then hold back just a bit until she catches me.  We decide to finish the last loop together, with her leading some and I lead some.  This refreshes me some and I'm sure I ran this loop faster than I would have had we not been together.  It did rain hard for a while, and the trail got a bit muddy in spots.  I fell a total of 3 times, but they were all soft landings so no worse for wear.  We finished just over 6 hours and congratulated each other on a job well done.
Posted by Reese at 9:31 AM No comments: