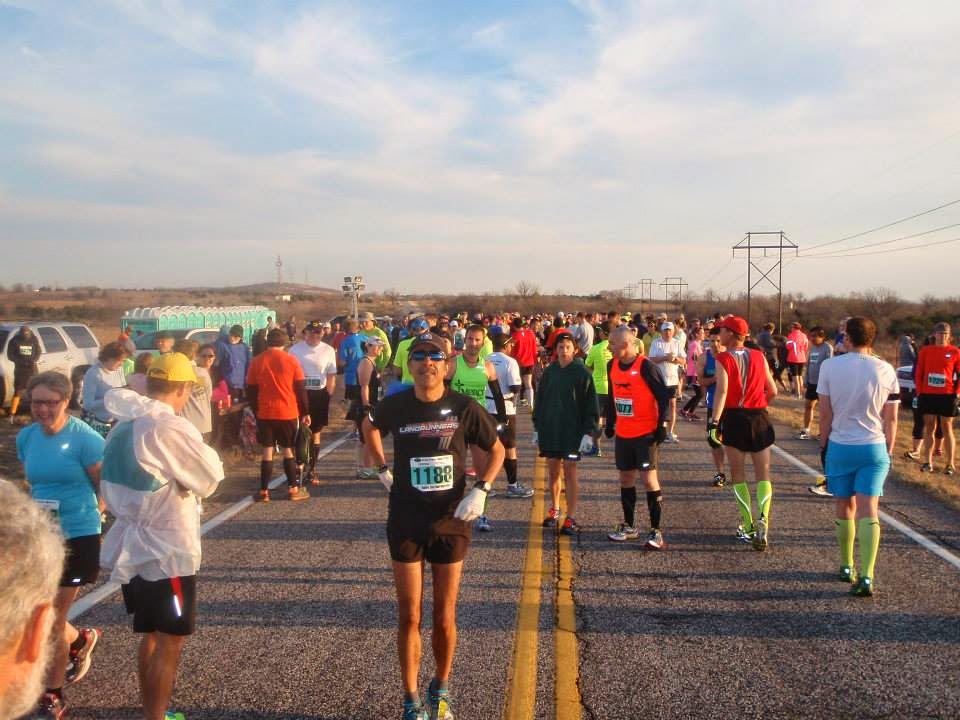 Our running club sponsored another bus trip to the A2A (Arbuckles to Ardmore) marathon, half marathon, and 5 k.  This is my 3rd year to run the half.  The bus left at 5:15 for the ride to the start.  First we dropped off the marathoners then to the start of the half.  It was cool but just about perfect for running.  We were able to stay on the bus until about 15 before the start.
My goal was to run as well as I could, but not push things.  The race starts downhill and is down or level for about 9 miles.  There are rolling hills throughout the latter part of the course.
The gun signals the start and we're off.  I start at around an 8 minute pace and try to stay under control for the first few down hill miles.  After that I drop into the mid to high 7's.  Things are going well for most of the race.  While it was in the mid 40's at the start it began to warm up as the race progressed.  Also, the winds were calm at the start things started picking up around mile 9.  Mile 9 was also where I started fading.  My pace dropped into the low 8's and I was doing my best to try to hang on.  I started walking the aid stations trying to get my 2nd wind.  I never did get back to 7's but did start to feel better and finished just over 1:45.  I won 1st in my age group and the prize was a choice of hats.  All in all I was satisfied with my time and feel like I'm on the right track to finish Boston in just under a month.
I ran an 8k on the Saturday before St. Patrick's Day and finished around 36:30.  I've done better but that was my first race since November.  I injured myself preparing for a marathon in January, I didn't run it, and was trying to make sure I was ok before racing again.
Posted by Reese at 7:40 PM No comments: