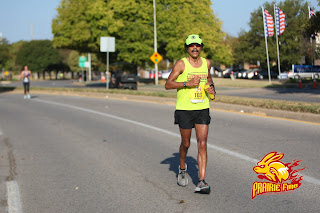 Prairie Fire Marathon – Wichita KS
I decided to run my first marathon this year in Wichita. I had several planned before, but COVID had other ideas. I’d run the half there about 9 years ago, but hadn’t run a marathon in KS.
I drove to Wichita the day before (Saturday October 10).  It's only about a 2 1/2 hour drive from Oklahoma City and straight up I-35.  I went to packet pick up first because it was just after noon and only about 4 blocks from my hotel.  Pick up went quickly and I soon checked into my hotel.  I had taken a small cooler with food and drink so I settled into the hotel, watched the Sooners (OU) beat Texas in 4 overtimes.  Boomer Sooner.
I saw the forecast said that it would warm up and be windy. I didn’t have high expectations because no matter how much I train, it seems I do better after running several marathons.
Started and stuck to my plan of nice and easy, let the race determine my pace. I gradually picked up the pace and was running decently until I hit mile 15. I could feel my energy dropping until 20, then it was survival mode. More walking than running just doing my best not to have a medical issue. Good news, finished, rested, drove back to Oklahoma and 4 days later feel mostly recovered.
The only slightly downside was the hotel would not give me a late check out.  I felt since they were the featured hotel for the race, that shouldn't have been a problem.  I won't blame the race though, the desk clerk was a bit of a jerk.  I sensed that before he said a word.
The race was well run, plenty of water and friendly people. There were some volunteers on 4 wheelers checking on people and I’d just give them a thumbs up and they’d keep going. Some drivers were not happy with the road diversions and the best show of the day was a policewoman jumping on the hood of a convertible sports car telling him to stop. Thanks to all of them helping to keep us safe.
Posted by Reese at 9:01 AM No comments: