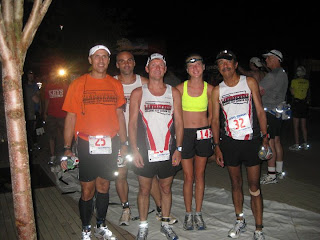 Friday, July 2nd was the date for my second ultra of the year. My first was the Steal the Seal 50k (31 Miles) which was really a training run for this race. This one was called the Midnight Madness 50 Mile run. Put on by the TATURS (Tulsa Area Trail Ultra Runners). The race was directed by Brian Hoover, Head TATUR. The TATUR's are known for putting on quality events.
This race was another midnight start. I met up with two friends in OKC at 8 P M for the ride to Tulsa. It rained hard on the way, remnants of a hurricane, and we were a little worried about our race. It was still raining when we arrived at the park for the start/finish, but it stopped before our midnight start. This race was 5 loops on the paved Tulsa River Trails. We would cross the Arkansas river twice on each loop. The loops were also reversed each time. Three times counterclockwise, and twice clockwise. I didn't think I would like this at first, but getting to see everyone on the trail turned out to be nice.
I had an outside goal of finishing under 10 hours, but really just wanted to run smart. I started around a 10 minute mile and ran fairly well. While it wasn't raining, the humidity was very high, and it was warm. First loop no real problems. I didn't stop in the aid stations long, and moved out for my second loop. Again no problems, but my energy did start to drop. Third loop of course I began to slow down. I still had a chance to beat 10 hours, but knew it wasn't likely. On my final loop, I really began to feel a bit better. I was into the walk/run mode, but since it was now daylight, cloudy so the sun wasn't shining, I was somewhat energized. That coupled with the fact that Chuck started running with me helped me increase my pace a bit. My new goal was now to beat 10:30. It was also starting to rain again. But the rain was actually welcome, it cooled things down some. I finished around 10 hours 26 minutes for an official distance of 51.5 miles.
Thanks to all the aid workers, pacers, and to Chuck for hanging with me the last 6 or so miles. Thanks to Mary for helping me get something to eat at the end. Thanks to the TATURS for a well run race especially considering the conditions.
Posted by Reese at 8:05 PM 3 comments: