Mi Viaje a Peru - My Trip to Peru 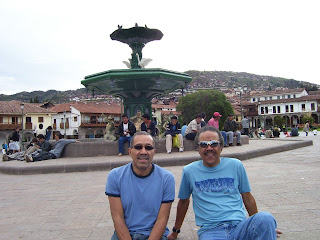 I am currently in Cusco Peru with my brother, on the left in the picture above.  We left the U S A on Saturday, January 29, and arrived in Lima Peru the 30th.  We transferred to a domestic airline and arrived in Cusco that afternoon.  I plan to update this one posting as events transpire.  I have been sightseeing so much and getting in so late every evening, I haven't had time to update the blog.  My excursions will slow down, and I will try to catch up in the next few days.
Our first tour was to the Sacred Valley.   We took a bus from Cusco and stopped numerous places.  One was an animal rescue area when they were nursing pumas and condors.  Below is a picture of my brother next to one of the condors. 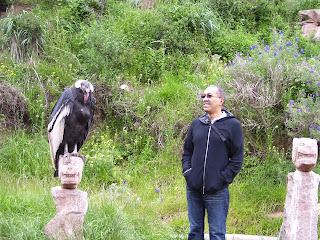 Next it was on to other parts of the Sacred Valley.  We travelled to Urubamba and Ollantaytambo.  Ollantaytambo is located at the foot of some Incan ruins.  At this point we were around 8,000 feet and had to climb up quite a few steps.  Each climb took a lot out of you, but we rested at various "terraces" that were cut into the land.  These were made for several reasons.  To resist erosion and to take advantage of the various "micro climates."  While the weather was never extreme, one minute we would be warm and within minutes it would be very cool.  Other times it would rain for 20 to 30 minute.  All of this was very interesting, but completely wore me out.  Because of the altitude, I don't plan to run in Cusco, but am definately getting in some major hill work.  Next up, Machu Picchu. 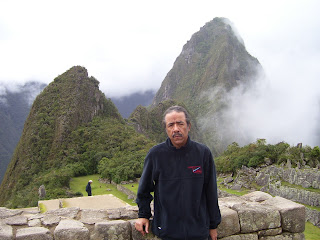 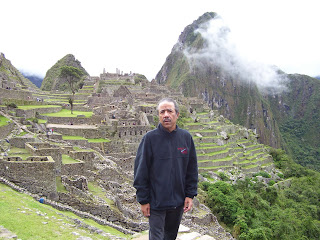 We had to be up at 4:00 a.m for the trip to Machu Picchu.  We were picked up by the tour van, taken to the PERURAIL Station to catch a bus to another city to take the train.  You could take the train straight from Cusco, but due to mudslides you had to go to another station.  We arrived by train to Aguas Calientes and had to take another bus up the mountain.  These were full size tour buses going up the mountain on a single lane dirt road, and it was raining.  When we met a bus coming down the mountain, one of us had to pull over.
When we go to Machu Picchu, we had to do some climbing.  Once we were into the actual Inca rooms and other structures, it was magical to me.  Our guide explained that this was not really a city, but a holy place, a place to come and teach and meditate.  And that when the Spanish came to conquer the Inca, that they hid this place.  It was not discovered until 1911 and had remained unseen for 500 years.  I won't go into all that I learned, but it had very special effect on me, such that I left our guide to be alone there for awhile.  I realize it was a combination of what Machu Picchu is and what I wanted it to be, but that was enough for me.
On to Lima.
We got to the airport for our trip to Lima in plenty of time.  I was really ready to leave, I loved Cusco and all the history around it, but I had been suffering from a minor dose of altitude sickness.  For me it was just a mild headache most of the time.  But my brother got very sick for about 24 hours.  He's not a runner, but he works out and is in very good shape.  We got to our gate, and as we boarded, they stopped us.  I thought what is this?  But they upgraded us to first class.  We were on TACA airlines, but they knew we were advanced members of American and United, so that's the only reason we could figure for the upgrade.  The plane was full also, so maybe they did it to make more room in coach.﻿  I've already questioned this good luck more than I should have.  Needless to say  we enjoyed our trip to Lima.
We arrived in Lima and took a cab to our hotel, ALLPA.  More about Lima tomorrow. 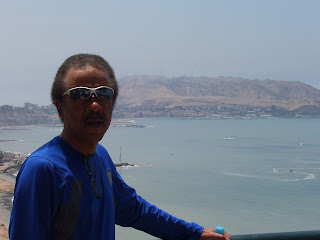 This is a view from just above a shopping mall.  The hill in the background is really a peninsula and the ocean is behind it also.
Lima is a city of about 9 million people so it is somewhat typical of large cities.  Dirty, fast, and problems with traffic.  We are staying in Miraflores (see the flowers) which is a district of Lima.  It is very modern and progressive.  It is considered a prime spot to live and as I've seen while running, it has plenty of parks and tourist spots, restaurants, shopping centers, and other entertainment.  I have seen more people exercising here than any where else I've been during this trip.  Yesterday we ventured to the Lima downtown area.  It took about 15 minutes to get there, and cost 15 Soles (a little over 5.00).  Like most Latin American countries, and I'm sure in other parts of the world, you negotiate the price before you get in the cab.
Downtown was very historic.  Lots of churches, goverment buildings, and of course restaurants and shopping areas.  And by shopping, I mean both regular shops and natives hawking their (mostly) hand made wares.  I'm a bit sick of being hustled every where I go, but I have to give it to them, most are hustling and not begging.  We've eaten both at Peruvian restaurants, and restaurants that cater to tourists.  I had my share of experimenting in Cusco.  So now I've mostly gone with foods that I'm familar with, but even at that, it's always a bit different.