Running Across the Panhandle - 42 Miles 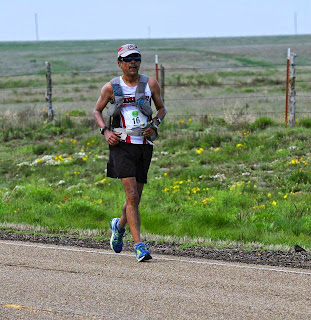 In preparation for my 100k race in Australia, I decided to run a revival of the Okie Relays.  This is a race across the Panhandle of Oklahoma, from Texhoma TX to Elkhart KS, about 41.5 miles.  You can run this race solo or as part of a relay team.  For my purposes, I decided to run it solo.  It's over 300 miles to the race, so I felt that it didn't make sense to drive it alone.  So I joined two friends for the almost 5 hour drive.  We made it with no problems, went to the spaghetti dinner and race instructions.  I had a hotel room to myself, so I slept well and got up the next morning to preapare for the bus ride to the start and the race.
It was chilly at the start, and the forecast called for cloudy to partly cloudy skies.  We start and I run with a couple of friends to the first aid station.  I felt good and decided to try to pick it up some.  I ran to the second aid station still feeling good with less than half the race left.  The sun would peek out, but it stayed fairly cool the whole race.  I reached the third aid station and begin to run/walk with more walking than in the past.  I was making a effort to keep my miles below 12 minutes and was mostly successful.  A friend who was driving a support vehicle told me that it would probably rain soon.  I told him I hoped to be done before then.  I came into Elkhart and had a little over a mile to go.  I finished in 7:31 and was happy to be finished.  I went to the friends car to rest a while and talked to other friends who were finishing.
Shortly it began to rain hard and they were bringing some of the runners end.  The rain didn't last long and I took our other rider out to when he had been picked up so he could finish.
Nice awards and then it was time to go home.  We stopped in Guymon to eat at Mr. Burger, I thought it was pretty good.
All the way home we were just behind storms.  But we made it with no problems and I was finally able to shower and then rest.
A great race that I would encourage others to run.
Posted by Reese at 10:14 PM No comments: