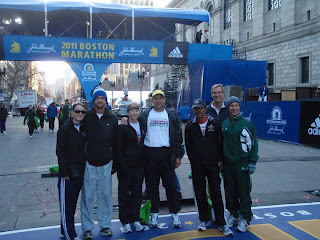 This was my third time to run the Boston Marathon.  One of my running goals for the year was to PR at Boston.  As I mentioned in my previous post, I've been injured, and had stopped training to hopefully recover enough to run Boston and the Comrades Ultra Marathon in May.  I didn't stop running, I just stopped running fast.  My rehab seemed to be going well, and I even started hoping that I'd be able to run Boston fast.
A large group of my running club members were going, and we had a lot of things planned together.  Most of us arrived either the Saturday before the Marathon (Monday, April 18) or before.  We went out to dinner Saturday, Monday after the Marathon, and Tuesday.  I enjoyed all of our outings together.

Many of us took the bus together to Hopkinton, the start of the marathon.  It was very chilly there, but the day was supposed to be very good for running.  Cool, and a light tailwind.  We started, and I was running with one of my running club friends.  Our pace is usually very similar, but lately she has been running faster than I have.  While we talked about our goals for Boston, we really didn't get specific.  She was running well, but faster than I thought I could hold, so after a couple of miles, I backed off the pace a bit.  I was holding around an 8:30 pace, and passed through the half in 1:51.51.  But I knew I wasn't going to be able to hold that, so I started slowing down even more.  By the Newton hills I knew I was going to walk some.  So every aid station I would grab both water and Gatorade and walk until I finished them.  While I wanted to run well, I at least needed to finish under 4 hours to get a decent seeding at Comrades.  By mile 21 I knew if I could just hold 10 minute miles I could get my sub four.  I finished in 3:57.05.  Not a bad time for me, but a positive split of 15 minutes.  Very poor pacing.  I'm not disappointed with the time, just my pacing.
I will be running the Oklahoma City Memorial Marathon this coming Sunday, May 1st, just 13 days after Boston.  This is more of a training run getting me ready for the 57 miles at Comrades, but with good weather and light winds I plan to try and beat the Boston time.
I haven't qualified for Boston 2012 and don't know if I will be able too.  But if I do, I'll probably continue to run there.
Posted by Reese at 7:21 PM 4 comments: 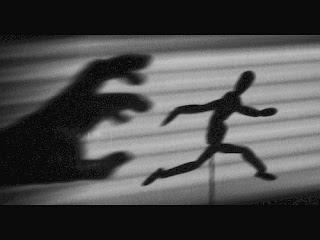 There are several reasons I haven't posted in awhile.  Been busy, very busy.  But the main reason is I'm injured.  Not can't run injured, but can't run the way I want to injured.  I have runner's knee.  I've actually had it for some time, but up until now, it didn't interfere with my running.  Yeah, that's sounds odd.  Runner's Knee that doesn't affect my running.  Well it didn't.  I could run as fast and hard as I wanted, and it wouldn't bother me until after the run.  But now, I can't run hard.  I've stopped all of my speed work that I was doing in preparation for Boston, and Comrades.  The fear part came in when I started speculating that this would be the end of running for me.  One pharmacist told me it was probably Arthritis and that the only thing I could do is mask the pain.  That's what I get for guessing and using the Internet instead of just going to someone who specializes in this type of injury.  I am doing something about it now, and I think I've made progress.  I'm seeing a Doctor about it, and he identified some problems right off the bat.  Anyway, I'm now fairly confident that I can do my runs, but also fairly sure that PR's are not going to happen.
I have run two races in the past month.  A 25K which I ran in just over two hours, and a half marathon that I ran in just under 1:50.  Neither of which is close to my best, but I was just happy to finish them.
Two weeks from today is the Boston Marathon.  And thirteen days after that I'm running the Oklahoma City Marathon.  My plan right now is to run OKC easy as a training run for the Comardes (Ultra) Marathon which is one month after OKC.  AARP was offering free entries for people over the age of 50 so I took them up on it.
Well, for now I'm going to close and try to keep updated a little more often.
Posted by Reese at 7:19 PM 1 comment: