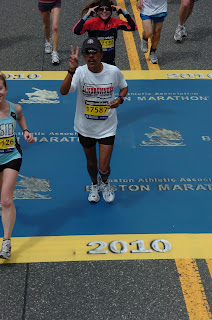 This was my second time to run Boston. Last year my only goal was to enjoy the experience, and just try to beat 4 hours. I finished in 3:59.35. I qualified at Tucson, 3:43.01, Dec '08 and that gave me two years. I hadn't run that fast since. I tried to P R at CIM, 3:52.26, in Sacramento back in Dec '09, but in retrospect, would have been better served to simply try to B Q. I have no regrets about that though, I went for it and paid the price. This year I had a goal of re-qualifying at Boston. That meant I had to run 3:45.59 or faster. That was my only goal outside of the always backup goals of finishing and not hurting myself.
In the days leading up to the marathon it rained. I flew in Friday because I wanted to just take it easy. The Red Sox game was rained out in the 8th inning and it rained some Saturday and Sunday. Some friends and I went for an easy 4 mile run Sunday morning, and it was misting. The forecast for Monday was almost perfect. Cool, mid 30's and partly cloudy in the morning, and warming to the 50's in the afternoon.
I made it to the Athlete's Village with no problems. Sat by a nice young lady from California and we had a good conversation all the way. Once in the village, I walked around for a while looking for some others from the running club but never found them. It was chilly, so I looked around for a spot out of the wind and in the sun and sat down.
Showtime
I was in the 2nd wave starting at 10:30. I walked to my corral and waited for the start. Boom, and we're off. Walking at first, but once you cross the timing mat you can start running. It's still crowded, but it didn't slow me much. Plus since the start is downhill, I needed to hold back a bit anyway. Once I got going at my pace, really a bit under, I felt pretty good but as with any long distance race I was apprehensive about being able to hold pace the entire race. I was to go through many ups and downs, but keep going in the knowledge that the down would soon give way to the up. From miles 8-11 I was in a zone like I've never been in. It was like I was in a bubble, no one around me and able to do anything I wanted. I felt like I could really pick up the pace here, but resisted the temptation. I was unable to maintain that feeling, but was still keeping pace. Boston is strictly a chip timed race except for the elites. I knew I had about a 3 minute cushion over gun time, but decided I wanted to meet my goal on gun time. Every mile had a clock so I knew where I was in relation to the start. Mile 20, fatigued but still on pace. Newton hills, still running and while I was hurting, I was running strong. Many were falling by the wayside, some having hit the wall, others with one pain or another. I ran up Heartbreak hill at pace, and once I topped it felt like I was going to make it. I did slow for one mile at an aid station. I decided I needed to get hydrated so I slowed to a light jog and drank both Gatoraide and water. Ramp back up for the finish. Under the Citgo sign and just a little more to go. Once I turned onto Boylston street and could see the finish in the distance I really picked it up. I could see the clock just turning to 3:44 and knew then that I would meet my goal by gun time. I finished and the clock read something like 3:44.40. I slowed and then started walking. Extremely happy I had met my goal. Later when I saw my chip time, 3:42.07. Not only did I re-qualify for Boston at Boston, but I had P R'ed at Boston. I trained hard for this race, and am so pleased that hard training paid off. Those of you who run know that training alone doesn't do it, you have to have other things fall into place also. Monday, April 19th, 2010 Boston MA, it all fell into place.
Thank you to all who wished me well, thought about me and the others you knew running there, and for all your congratulations also. I appreciate you all.
Posted by Reese at 4:41 PM 4 comments: 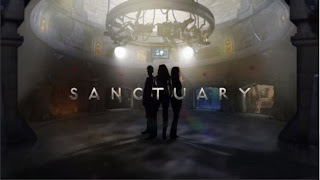 Sanctuary is one of those words I've always liked. There is so much contained in that one word.
There are many definitions of sanctuary. But the one I like best is "A place of refuge or asylum." Asylum is another word I like, Leon Russell had a group called the "Asylum Choir." And another called the "Shelter People." All of these words have a similar meaning to me, Asylum, Shelter, Sanctuary. Running is my Sanctuary. Not a physical place, but a place. I can go there other times, but running has the added benefit of lowering my resistance. Like when you stay up far beyond time to sleep, not under the influence of drugs, just going beyond time to sleep. Fasting is another way to get there. But for me, it is usually running, running beyond the comfort zone. Whether it be by pushing your speed, endurance or time limits. I run alone a lot, not so much by choice, but because I work in a place away from people of a like mind. I have never seen another runner during my weekly runs near my job. But this is fine with me. I get my communal runs on the weekend. But sometimes even that is not possible. I was out of state on business last week, and missed the club run. So I did my long run, 21 miles, alone last Easter Sunday. It was a wonderful time. I did see a lot of other runners, even a few I knew. But our paths simply crossed, and were not joined.
When I got home the house was vacant, everyone was already at church. I had promised to go, so I went. I was still in sanctuary, a place where I can be alone with myself, even among the hundreds who surrounded me.
From the Song "Million" by Paul Kantner

"And yet there were some of the men and ladies
Who remembered that in the beginning we were one
A body and one spirit in all of our bodies
Whoa... oh sanctuary
Come and sail with me ... revelation
Standing on the edge of civilization"
Posted by Reese at 9:30 AM 2 comments: